Last month was Software Freedom Day. Events have taken place around the globe. It’s a pretty low key affair compared to all the scheduled WordCamps. Nonetheless, it’s our time to reflect on free software.

WordPress is perhaps the most tangible example in the last decade of free software for the masses.

Our favorite content management system (CMS) is the culmination of hundreds of libraries of code, that do everything between displaying a page in your browser, to storing your content in a database. All of it piggybacking on free software.

For a refresher, this is what free means, I quote from the source:

By free, we are talking about freedom, and not price.

Comparisons between the content management systems like Drupal, Joomla and WordPress, and their respective market shares, are antiquated.

The ongoing struggle is between proprietary systems, and Automattic, the company that largely funds the development of WordPress.

Simply compare the numbers between Wix, Weebly, Tumblr, and Automattic on CrunchBase to get a sense that WordPress isn’t the clear leader.

In 2010, Matt Mullenweg, the co-founder of WordPress, and CEO of Automattic, set up a foundation to ensure the WordPress trademark would not belong to his own company.

This was a bold move, for two reasons:

Matt could have taken a heavy handed approach on WordPress in the interest of his own business goals. He embraced the free philosophy instead. The bet is that both Automattic and WordPress can succeed together, as different entities.

This decision is to be admired in the context of Silicon Valley, where the vast majority of entrepreneurs, and investors, care mostly about going public, or being taken over. In other words, make tons of money.

Automattic raised 160 million dollars earlier in 2014 specifically to compete better against proprietary platforms. Moreover, if WordPress is to survive beyond this decade of mobile, it needs to evolve faster.

The future of WordPress depends on a bigger Automattic no matter how large and talented our community is.

What’s left of the software freedom effort in our community other than WordPress? WordCamps, the local gatherings of WordPress enthusiasts.

The WordPress Foundation was born out of a single mission: protect the trademark. It doesn’t have neither staff, nor any other activity.

Andrea Middleton, an Automattic employee who manages the WordCamp program, explained to us how the Foundation evolved thereafter, and found another reason to be:

Around 2009-2010, some WordCamp organizers had legal or financial troubles because of organizing community events, and no one wanted that to happen. There was this non-profit not really doing anything except holding the trademarks, so we started using it to protect WordCamp organizers financially and legally.

The Foundation sole activity is handling WordCamp money, according to its 2013 tax filing of the Foundation.

The theme and plugin repository, on the other hand, belong to Matt Mullenweg himself. This further blurs the lines between the man, the foundation, the company.

Matt clarifies by email to us :

WordPress.org belongs to me. […] A good way to think of it is like a library – the building belongs to someone but everything in it is copywritten by its author and available for everyone to check out.

It’s administered by a mix of Automattic, Audrey Capital employees, and volunteers, following the spirit of WordPress, the CMS.

Envato is the remarkable company behind ThemeForest and CodeCanyon, the top market places for WordPress premium plugins and themes.

Its enthusiastic co-founder and CEO, Collis Ta’eed, revealed at Pressnomics 2012 that Envato was started on a maxed out credit card. Their first offices were restored latrines in the basement of a former factory. A decent alternative to the usual garage outfit.

Matt had refused the idea selling items in the theme and plugin repositories on wordpress.org. Only free items would be available there, otherwise, it would have put him at odds with the community.

Without taking credit away from their business acumen, Envato was thus handed the golden goose. Market places tend to be monopolies, and Envato’s envious position is no different.

Envato doesn’t embrace the free software philosophy, ironically. In fact, they have a track record against it.

Envato dreads the distribution rights of the GPL:

They feel that these two rights will expose their authors to blatant copycats, create fear and panic from their top authors, and sending their golden goose to the kettle.

In 2013, under a lot of pressure from the community, Envato finally offered theme and plugin developers the possibility of selling their items with the full open source license, specifically GPL, the same as WordPress uses.

This was an improvement to having a partial license, popular among authors on Envato, where part of their software, like CSS and JS files, were still under a restrictive license.

This was meant to be Envato’s fresh start in the community. It was not to be.

At the end of 2013, during the Pressnomics conference, I asked Helen Souness, the manager of marketplaces at Envato at the time, what adoption of the GPL license they had among their authors. She refused to share any numbers, and was clearly irked by my question.

Today, it’s impossible to search items by license, such as GPL, in either ThemeForest, or CodeCanyon.

Their network of blogs, and their FAQs don’t encourage, or even mention GPL. The default license for new items isn’t GPL. As a result, all the top selling items on both marketplaces are still using a default, and restrictive license.

To this day, Envato, and any author selling on its market places, are banned from speaking or sponsoring WordCamps. The message from the Foundation is rather clear: either you embrace open source in full, or you’re not welcomed.

Free software has made Envato, and its authors, a decent living, even as they shun it. Cries against this hypocrisy has long been the fodder of the WordPress blogosphere.

Envato is unlikely to change its stance. Its business is stronger than ever. Consumers don’t care about licensing. Authors are mostly ignorant about it, or scared their work might be stolen.

In the end, Envato wins without the totally embracing the open source philosophy.

This doesn’t mean we should boycott the company, or its hard working authors.

The door should always be left open. WordPress has nearly always been all inclusive. It shouldn’t stop today.

Time to pay for free free

Matt Mullenweg recently proposed that companies should invest 5% of their resources to the development of WordPress itself. Free software doesn’t come cheap.

When was the last time you encouraged open source projects financially?

Donations notoriously don’t work. We know this ourselves: 95% of our own users are free riders. Good for them, we also love free free software.

Here are a few ideas for donations: 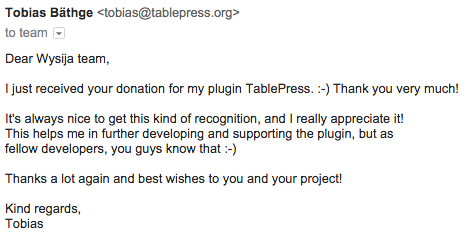 Even the smallest amount of money translates into gratitude.

In the case of MailPoet, we simply encourage you to leave a lovely review. Thanks!

Join 46,222 subscribers & get original tips and tricks delivered to your inbox each month.